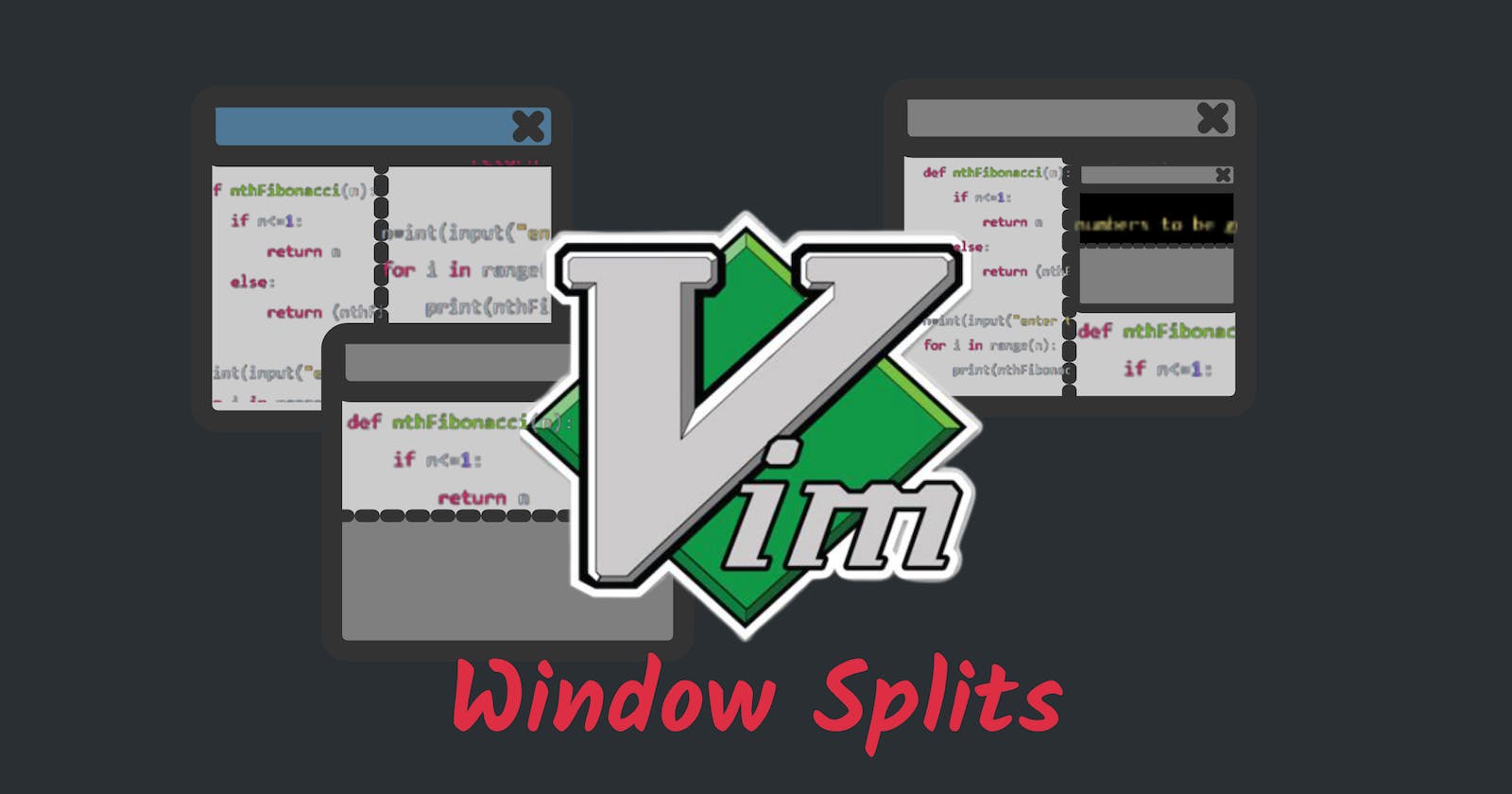 Have you ever been stuck in Vim opening multiple files within a single window? Didn Creating Window splits is quite straightforward. You should keep in mind the

Have you ever been stuck in Vim opening multiple files within a single window? Didn't anyone tell you, you can create multiple windows and split them within a single tab. Definitely, the window splits will be in separate buffers. In this way you can create multiple windows inside of a single Tab, what are Tabs? You can learn some basics about it from my previous article about Tabs in Vim . We can either create Vertical or Horizontal splits within the window making it flexible to work with multiple files in Vim. This article will look into the creation, navigation, closing, and rearrangement of Window Splits.

Creating Window splits is quite straightforward. You should keep in mind the following things though: - You can create a horizontal or a vertical split within a window. - Creating a Split either vertically or horizontally can shorten the current window's size, making it equally spaced.

Let's take a look at creating the vertical and horizontal splits one by one:

Vertical Split as the name suggests, it will split the current window into two halves vertically or a standing split between two windows .

The below image clearly shows a vertical split between two windows. Here we are splitting a single window into two windows. We can also think it of in splitting the window from left to right. 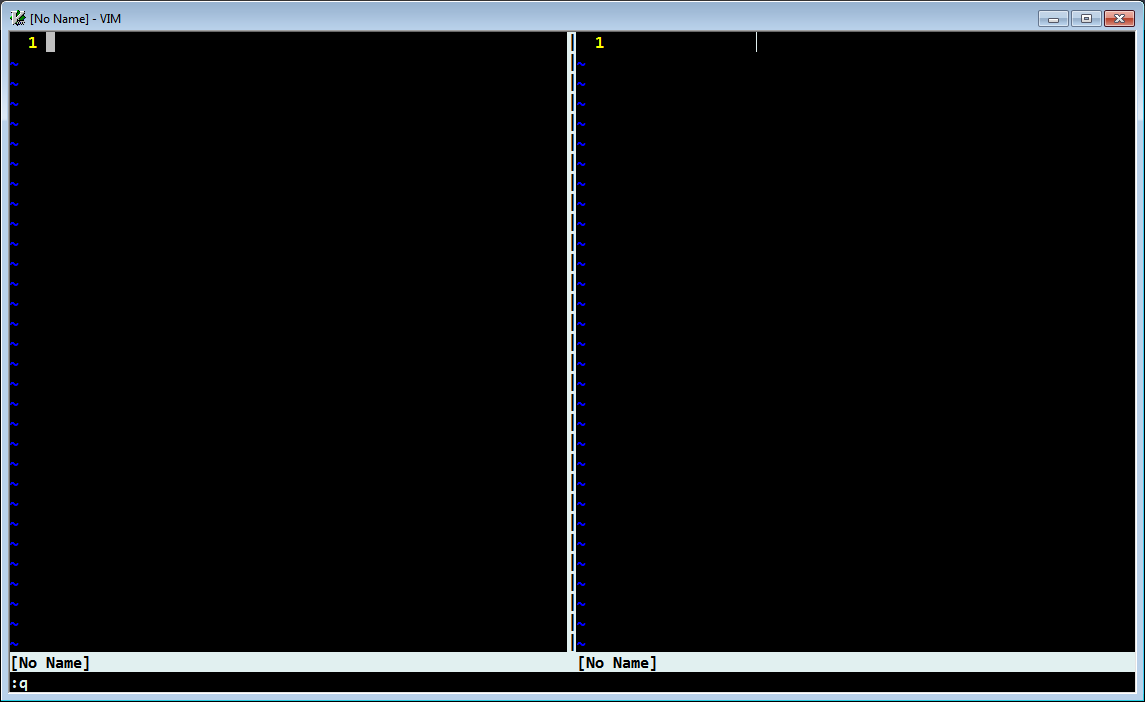 To create a vertical split, you can use :vsp or :vsplit to create a split of the same file/ blank file.

If you already have a file open, it will open the same file in the split as long as you don't specify which file to open. You can specify the name of the file after the command :vsp filename or :vsplit filename 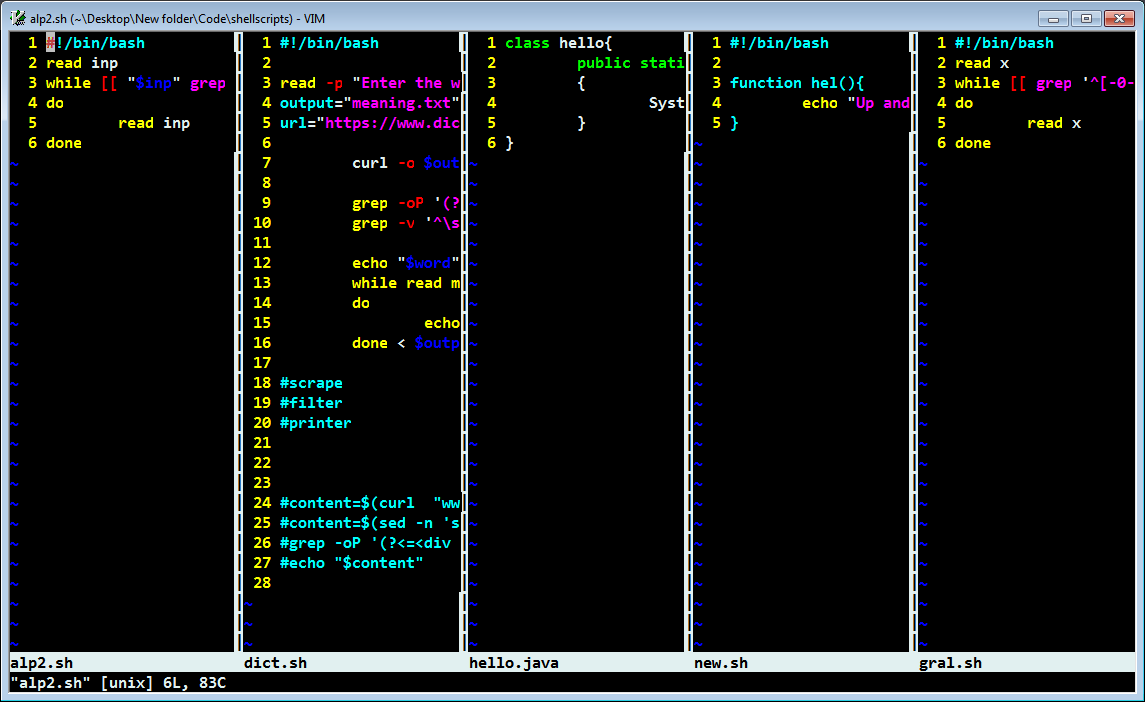 In the above screenshot, I have created 5 vertical splits from a single window, so making them equally wide and evenly spaced. This might not be useful every time but can get quite handy in some tricky situations.

Similar to Vertical splits, we have horizontal Splits indicating to split from top to bottom. We can split a single window into two halves horizontally or a sleeping split between the windows .

The below image clearly shows a horizontal split between two windows. Here we are splitting a single window into two windows. We can also think it of in splitting the window from top to bottom. 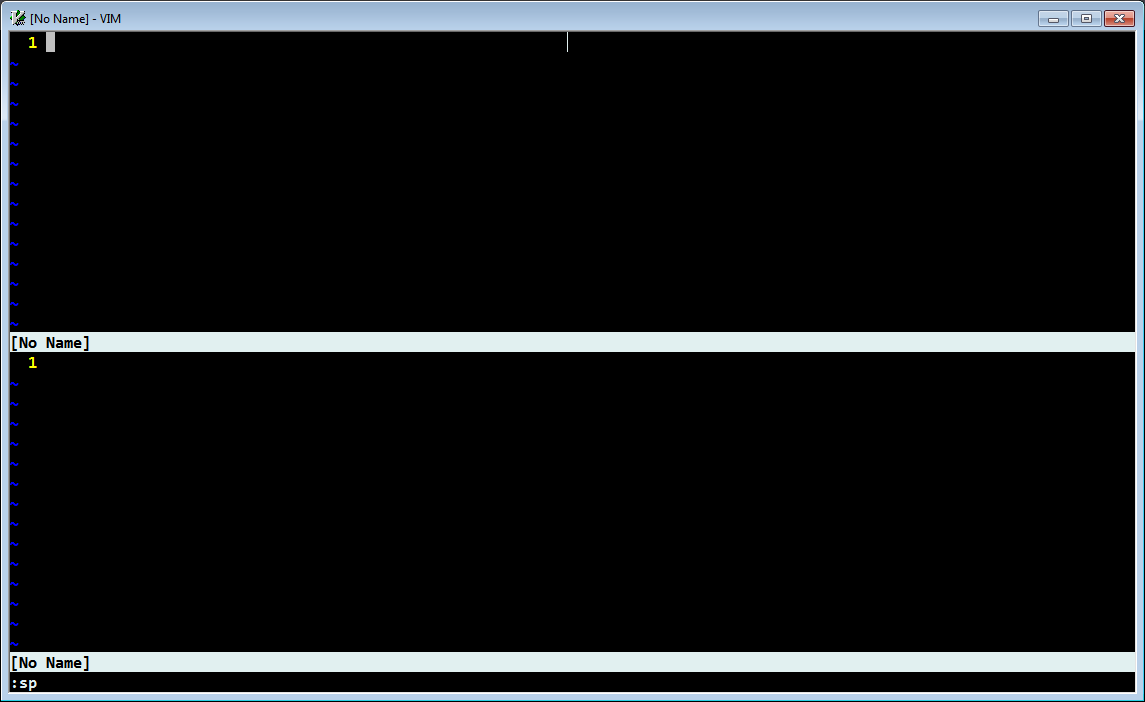 Similar to the vertical splits, you can open files by creating the split. You can use the command :sp filename or :split filename to create the horizontal split between the windows and opening a specified file in it.

Again as seen in the vertical split, we can create as many splits as we like. This looks very ugly but who knows when you may need this. We can basically create Splits in any order of vertical or horizontal, we'll see it in the later section to the same. 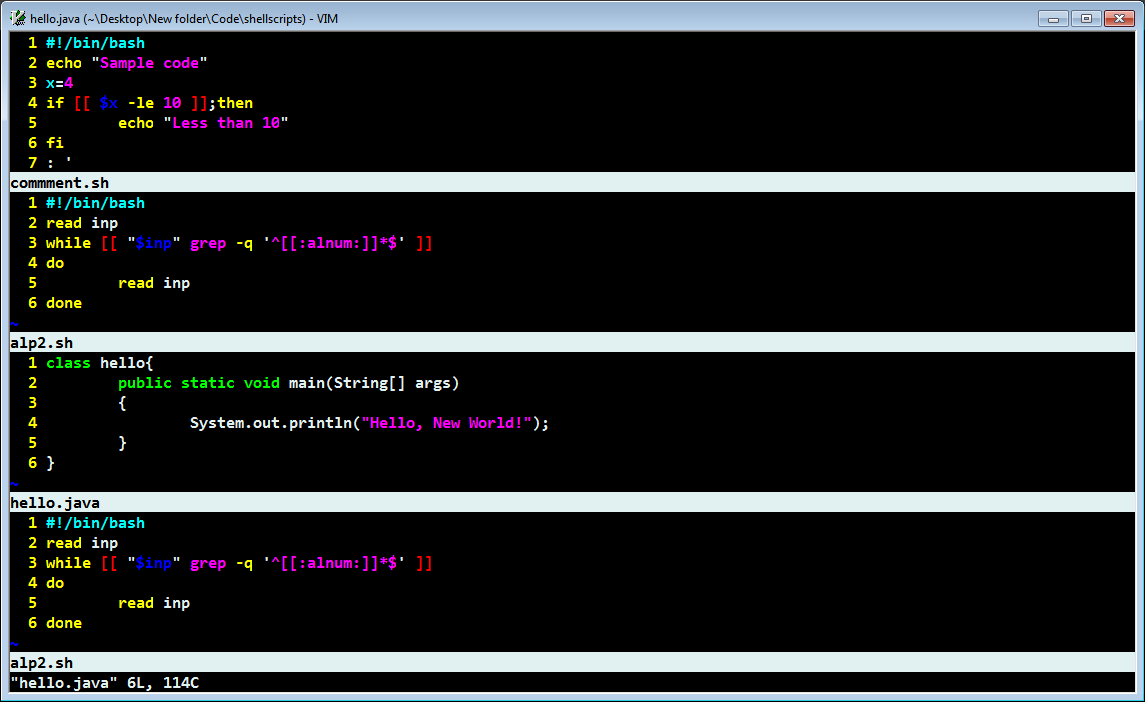 Vertical and Horizontal Splits Together 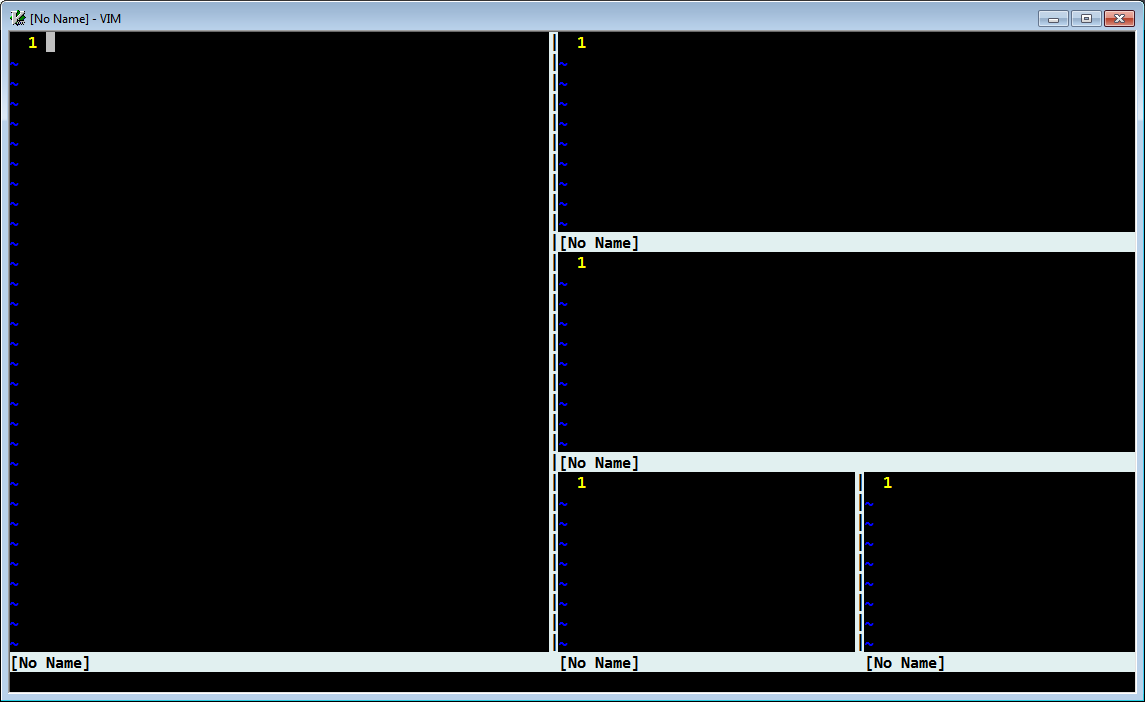 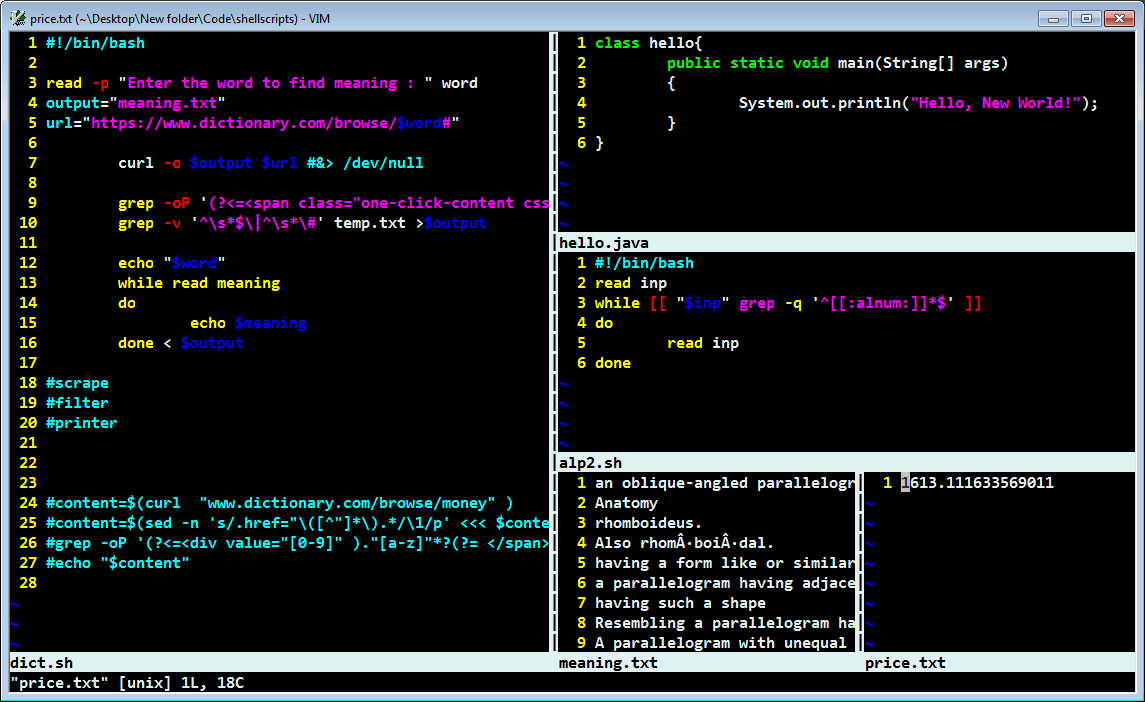 Now let's talk about the navigation around these splits, it's again a simple thing. We can use Ctrl+w as our primary command along with Vim navigation to move around the splits. Like for example Ctrl + w + h will take you to the left split to your current open window. You can also use Ctrl+w ** twice** to hop around to the next window split in a repeating loop.

Ctrl + w + w -> Switch to the next split (in the order of creation of those splits).

These commands might be good enough to pull you through any splits from anywhere, it just becomes easy to use Vim navigation inside of these. You can use arrow keys if you are stuck somewhere but using Vim key bindings will work out of the box.

If you think you are wasting time going into the command mode and typing the commands to create splits, well there are some shortcuts for you.

This will open the split with the current file in the original window, so if you need to change the file, you can use the edit command ( :e filename ) inside the split.

If you have a specific set of splits of a kind open, you can rotate between those. Like for example, if we have a horizontal split, you can rotate the split to move the upper split down and below split up.

From the above illustration, we can see we rotated(swapped) the splits. We can also use certain commands to arrange the splits into appropriate positions according to the user.

We can see that we were able to swap the splits to a location suitable according to our wish. We can definitely switch the splits internally as well.

We can resize the splits as per the requirement and remove the equality in those splits. We have a couple of options to do this:

We can also use Ctrl + w + _ to minimize all the window split except the current one.

Now after doing all sorts of wizardry with the window splits the finishing touch is to close those splits after use. We can surely use :q to close the current window split but that is not intuitive to enter each split and manually close all of them, we can use:

Ctrl +w + o -> Quit all other splits except the current one.

So, we have seen the basics of using Window Splits in Vim. Please let me know if there is some important point that is missing. Thank you for reading through here. We have seen how to create, navigate, rearrange, closing and other basic stuff related to Window splits in Vim.

Hopefully, this might have given you some good idea to deal with Vim in windows splits. Happy Coding and Viming :)