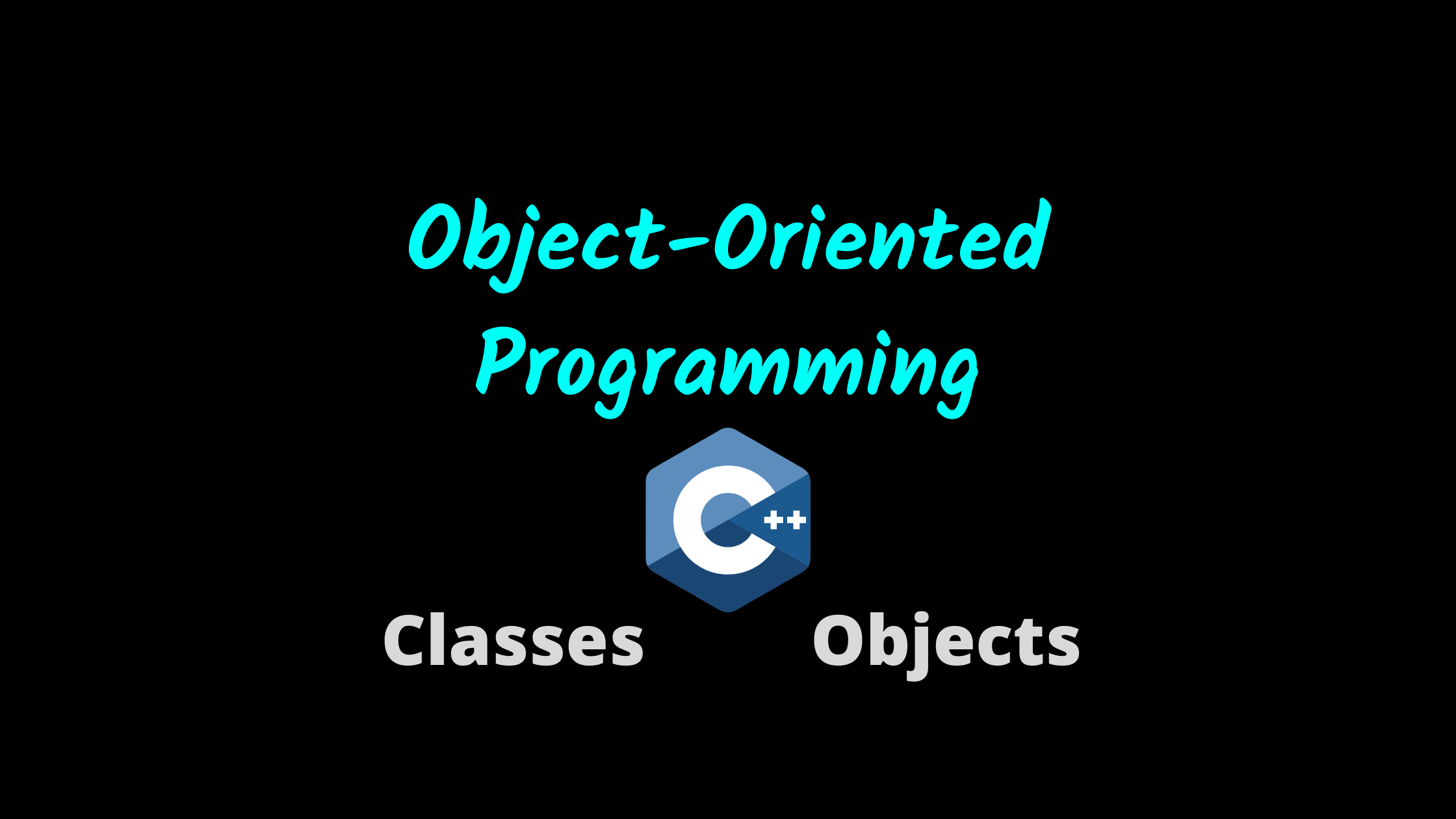 What is Object-Oriented Programming?

Object-Oriented Programming(OOP) is a way to structure and design a program or an application. Object-Oriented Programming deals with creating classes and objects and it's related terminologies. OOP helps in following the principles like DRY(Don't Repeat Yourself) and KISS(Keep it Simple Stupid). Using OOP certain applications and problems can be solved in a simple and efficient way. It helps in better understanding and readability of the code.

In OOP we create a collection of the data and functionalities by organizing in a structure called Class . We then instantiate or create the actual data by creating an object of the particular class. Once we have created a class, we can simply create as many objects as we need to. Objects are basically the storage of the actual data in memory. Let's explore them in the next few sections.

A Class in C++ should be defined outside of the main function. In C++, class is a reserved word and hence it is used to declare and define a class. It has a general structure like:

It's a convention to use the initial letter of a Class Name Uppercased. We can define class methods outside the class body as well, we will see it in the next few parts of the series.

Here in the above code, we have a class called Animal and it has 2 properties called legs which is an int and name a string. We also have a method called print which displays the current object's name and the leg count. We will see what is the current object in the next section. 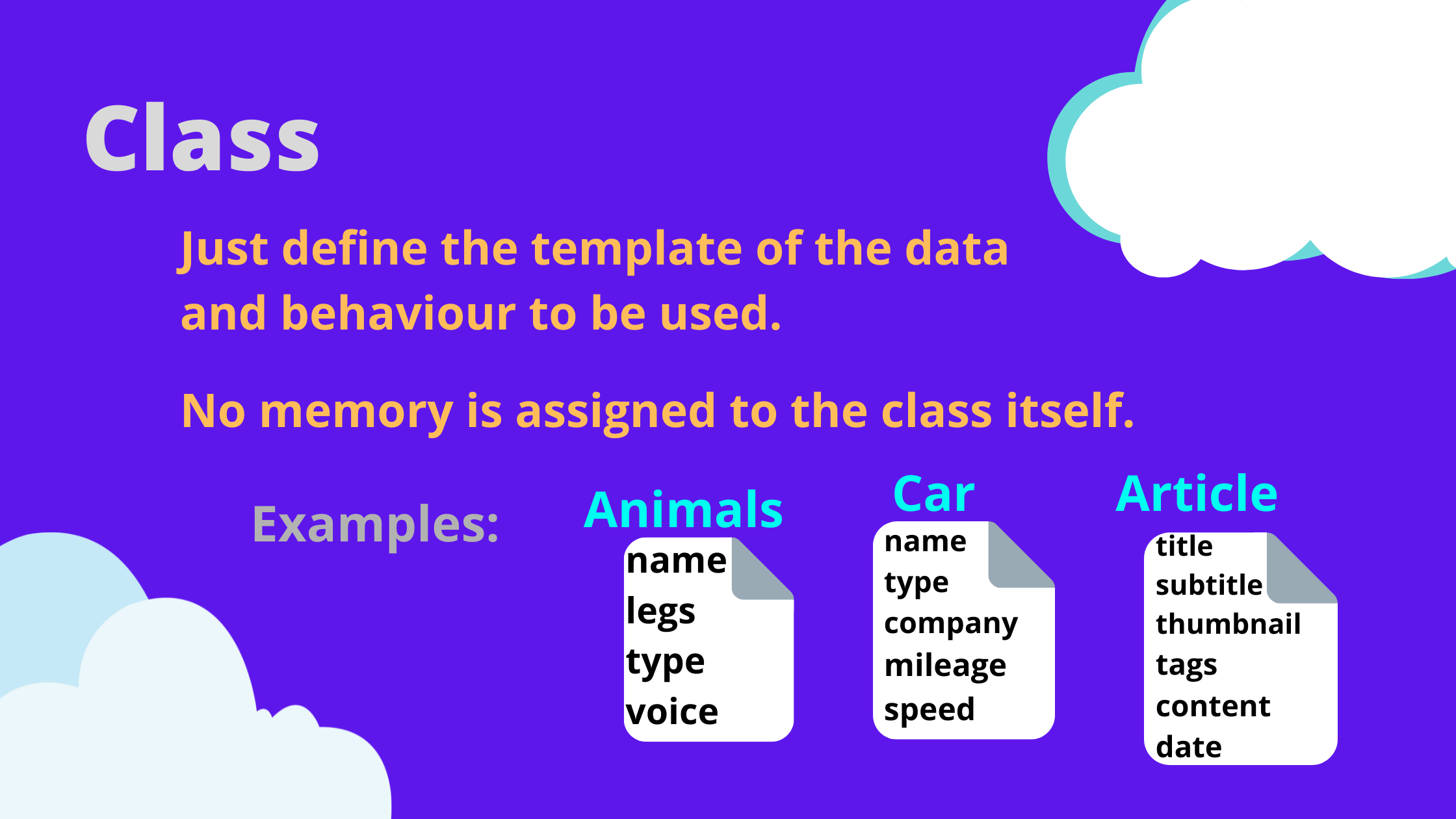 We use those properties or the variables defined in the class in our application either by accessing them through the objects or in the methods of that class. The variables or properties in classes are not assigned to any memory address i.e. they are just kind of a blueprint or placeholder tags to match for the data.

We have written public before the definition of the properties of the class, it is an access modifier. Don't worry we will see it in detail in the next few parts of the series, just for time being understand that we can change whether we want the main function(or any function globally) to access the class' properties or not.

We are saying public which means we can access the properties of this class anywhere outside the class. This is not a good practice but just for simplicity of understanding, we are using public. If you do not specify anything like public , it is by default private , which means the properties of the class are not accessed anywhere outside the class . Let keep it simple right now.

We also have other concepts like defining the methods outside/inside the class, header files, constructors, destructors, and many others related to a class definition, we will cover it in the next few parts.

Now, we have created a class but where is the data actually? It will be in objects , We actually assign the data or properties to a memory address by creating the objects of that particular class. 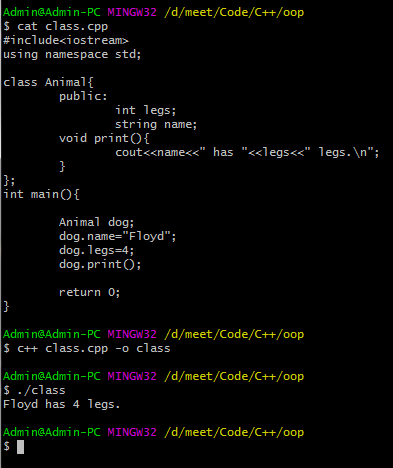 If Animal is the class, then the dog here is the object. As simple as you can think. We are technically instantiating an object when we say Animal dog . We assign the variables the memory as defined in the class. We give some value to the properties using the . (dot syntax), after the class name.

So dog.legs = 4; will assign the value of 4 in the memory address of the object's property(dog is the class and legs is the property).

Similarly, we can call the function associated with the class as we do for properties but we use () to indicate to calling the function. 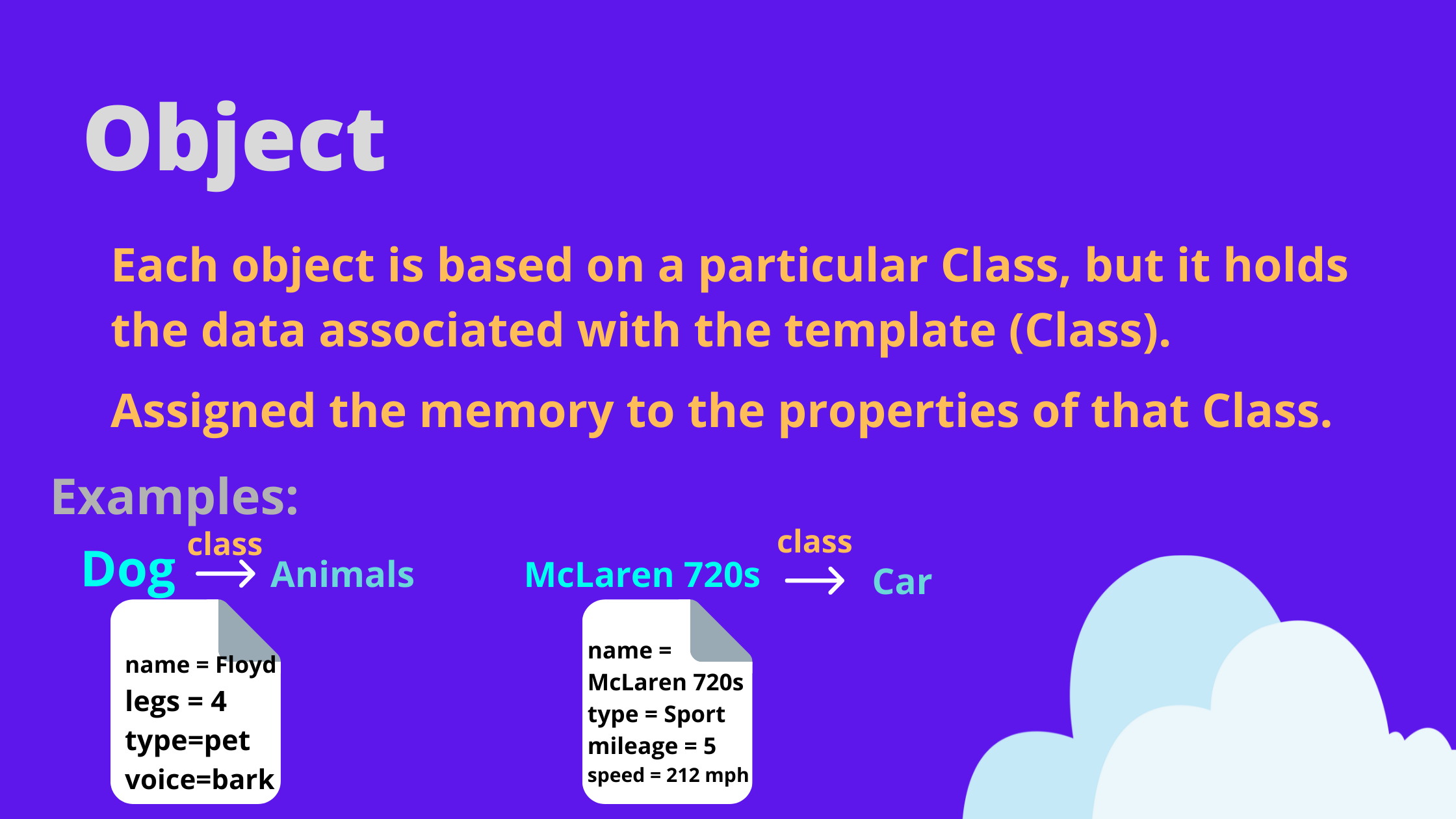 So that is how we create objects in C++.

Why and When to use OOP

The following might be the reasons to use OOP in an application:

So, we have studied the concept of Object-Oriented Programming and how to define classes and create objects in C++. There are a lot of concepts in OOP to grab up in the next few parts of the series, but this should build the foundation of OOP as a paradigm or a way of thinking when it comes to problem-solving and programming.

I hope you have got a good introduction to the basics of Object-Oriented Programming and its semantics in C++. Thank you for reading. In the next part, we will explore the Access Modifiers/Specifiers in the Classes. Until then Happy Coding :)

My Journey as a Technical Writer